Cycling and Pedestrian Bridge in Lisbon

The evaluation of 62 submissions took place at the Lounging Space with 39 Portuguese and 23 international submissions from the following countries: Bangladesh, Belgium, Brazil, China, France, India, Israel, Italy, Jordan, Spain, the United Kingdom, the United States and Tunisia. The UK was the most represented international country in the competition.

The goal of the bridge is to facilitate access for cyclists and pedestrians in Lisbon, encouraging the use of bicycles in the city and establishing a legacy for the city and its inhabitants. 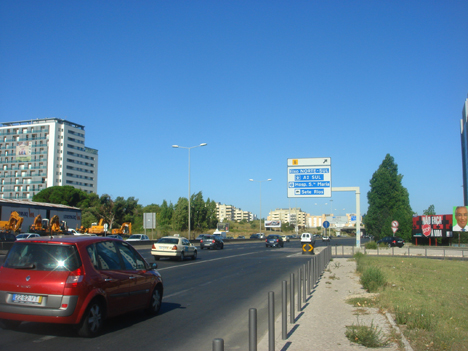 Description
The promoters intend to study the construction of a cycling and pedestrian bridge that connects the path of Quinta da Granja – Entrecampos to Torres de Lisboa.
Under the motto “It’s about time to be positive”, this Competition aims at going beyond the project of a bridge, and can be seen as a pretext for a closer relationship between Promoters and the creative agents.
The projects submitted have to reflect energy efficient solutions and have to be sustainable both at the levels of execution, maintenance and environmental solutions. The use of autonomous means of producing energy and innovative use of materials will be valued, as well as its urban integration and the surrounding landscape.
The total amount of the investment in this intervention, including the, project, work and the payment of all the inspections, is set at € 1,000,000.00 (one million Euros).
It should also have a connection, in visual terms, to the heritage of the Galp Energia brand and a specific place for the signature of the brand.
The project submitted by the candidates must be original and specifically made for that effect.

Jury
To be announced by 15th August