NEX has won the Cadogan Café design competition, a £2 million project for a new café, which will sit near the entrance to the Saatchi Gallery in Duke of York Square in Chelsea.
Widely regarded as an emerging force, NEX saw off strong opposition from finalists Architecture 00, Carmody Groarke, Duggan Morris Architects, Pernilla Ohrstedt & Sarah Price Landscapes and TaylorSnell.

The Cadogan Estate is seeking a design team to create an exceptional and innovative new café for Duke of York Square - at the very heart of one of London's most sophisticated districts.

Description
In the last ten years, the Duke of York Square re-development with its shops, restaurants, offices, Saatchi Gallery and public space, has become a popular feature of the King's Road area. This elegant scheme was the first new public square created in London's West End for over a century. It opened up to the public a military site, which previously housed the Duke of York's regimental barracks and other supporting buildings. As part of the development, the notable Royal Military Asylum, designed in the Palladian tradition by John Sanders, was reinvented as the Saatchi Gallery. 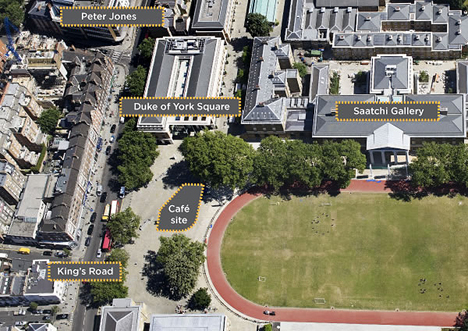 The original scheme included a café, described by The Architects' Journal at the time, as 'a transparent temple to the cappuccino'. This café (which sits beside the principal thoroughfare to the Gallery and slightly back from the main road) has been hugely successful and, as a result, overwhelmed with visitors.

The Cadogan Estate's decision to build a new building on this key site, offers the opportunity for fresh thinking about enhancing the space, connecting with the existing environment and local community and above all, making a distinctive contribution to this historic and stylish part of London.

The Cadogan Café Competition, which seeks to find the best team for this project, will have two stages. Initially, Expressions of Interest are sought, following which five to seven teams will be shortlisted (stage two).

Prize
An honorarium of £5,000 will be awarded to each of the unsuccessful shortlisted teams following the selection of the winner.