The ambition is to aim for building a landmark in the city of Prishtina and an architecture that stands the test of time. 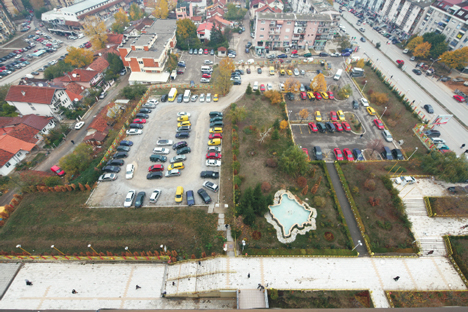 Description
Prishtina is the administrative, political, cultural, educational centre and the capital of the Republic of Kosovo. Its development and importance today is related to the function it had in the past and to this day. Prishtina lies in the north-eastern part of Kosovo which is in a crossroad connecting it to the inner Balkan Peninsula and the sea coasts. This geographical position led to a fast social economic development of the city.
According to preliminary results of the population registration of 2011 the municipality of Prishtina has a population of around 200,000 permanent inhabitants.
The project for the Central Mosque of Prishtina has an extraordinary importance considering these factors:
- The urgent need of praying space due to these facts: the growing trend of the praying persons and the use of city's public spaces for this during the Friday prayers.
- Mosque coverage of the densest urban area of the city, the neighbourhoods around the competition site. - The need of expressing the identity of Islam and the great expectations of the Muslim community of
Prishtina. - The competition site is located in one of the most prominent areas of the city. - Integration need of the Mosque from the, until now known, the typical old town environment into a
different, the new part of the city. - The enormous time gap from the existence of the old great mosque – the Mehmed II Fatih Mosque (year
1460), the transfer of the leading role to the new mosque.

Jury
Not yet announced
Public vote will be added to the evaluation criteria of the Jury and will make up a 15% of the overall points.

Organizer
The Islamic Community of the Republic of Kosovo