A temporary center of information and communication is planned to be placed in the city of Kassel, a hybrid space housing several functions during the 100 day venue.

Description
The documenta is regarded as one of the most significant and renowned exhibition venues of contemporary art worldwide. It was initiated in Kassel by the artist and art educator Arnold Bode in 1955.
After the period of Nazi dictatorship, this venue was intended to confront and reconcile the German public with international modernity and with its own failed education. Nobody at that time could imagine that the exhibition, often labeled as "One Hundred Day Museum", would one day become an unprecedented success - and yet the documenta will take place for the 13th time in the summer of 2012.
During the 13th documenta, a temporary center of information and communication is planned to be placed in the city of Kassel, a hybrid space housing several functions during the 100 day venue. Next to different areas such as a lecture room, event stage, press center, shop or bookstore, gastronomy and documentation area, a series of necessary ancillary functions have to be also included in the planning.
Beside a draft of a central structure, another task is to depict smaller satellites in exemplary form that can be clustered around strategic bases in the city.
All in all, approximately 1000 square meters of usable area is planned for the documenta center of information and communication. On the one hand, the aim of the assignment consists of a sophisticated space conceptually thought out that will react in its nucleus in terms of architectural and urban design to the greatest exhibition of contemporary art in a sustainable manner. 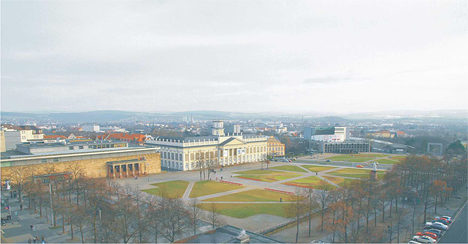 Jury
Individual jury members will be named at the announcement of the competition from 31 January 2011.

Entries
The complete competition brief with a detailed description

Timetable
The jury will meet in October 2011 which is followed by the award ceremony as well as an exhibition in the documenta hall in Kassel.