This Competition seeks new pedestrian bridges design on both the upstream and downstream sides of The Heiwa-ohashi Bridge in order to provide a safe and amenable pedestrian environment. Project costs will be 600 million Japanese yen or less.

Thus, the City of Hiroshima has taken up the project of renewing Peace Boulevard so that the citizens of Hiroshima and the people from around the world who come to visit Hiroshima may again make use of the boulevard as a place of rest, relaxation and interpersonal exchange.

The Heiwa-ohashi Bridge has the important function of providing access for many visitors to the Peace Memorial Park; we have decided to repair and strengthen the existing bridge in order to allow for long and continued use, and have also decided to install new pedestrian bridges on both the upstream and downstream sides of the main bridge in order to provide a safe and amenable pedestrian environment.

For the additional pedestrian lanes, we must bear in mind that the Heiwa-ohashi Bridge sits adjacent to the Peace Memorial Park, which has been designated as a place of scenic beauty by the national government, and also that the bridge’s railings were designed by the prominent, world-renowned sculptor Isamu Noguchi; in this spirit, we must not only make the new bridges into safe, with enough space for ample pedestrian traffic, but must also take care to harmonize them with the existing Heiwa-ohashi Bridge and Peace Memorial Park, and the surrounding area. Furthermore, the designs of the bridges themselves must be outstanding and exceptional in their own right.

Therefore, based upon the “Heiwa-ohashi Pedestrian Bridge Development Policies” (hereinafter, the “Development Policies”) compiled in March of 2008, we hereby open a public design proposal competition with the objectives of procuring an excellent bridge design which is also in conformity with the design concepts set forth by the City of Hiroshima; of raising both interest in and understanding of pedestrian bridge installation among the citizens of Hiroshima; and also of providing an opportunity to discover new talent by allowing for broad participation in the design project. We will select a design for the installation of the pedestrian bridge to be located on the upstream side of the existing main bridge, which will be built first. 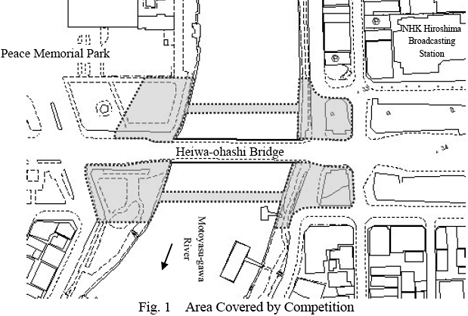 Organizer
The City of Hiroshima