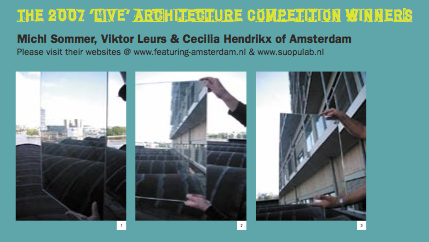 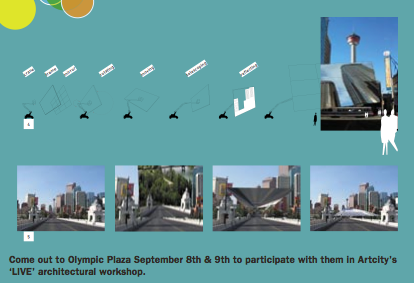 Description
RUPTURE
Rupture, when considered an 'acting' force of change to something constant, an interruption occurs. When the 'rupted' first appears as such, the 'changed' establishes its complete origin and end. Thus, the 'pre-rupted' has the same knowledge, meaning and importance to that what is (or will be) changed. If we reverse the spatial relation between the 'changed' and the 'pre-rupted', the linearity of the action becoming thought is interrupted via metonymy by intermitted spaces in Time. This metonymy is what alerts change of its changing whilst remaining pure to the origin and end at all moments of rupting. In other words, if we 'freeze frame' a change through (and acting in) Time, what we comprehend is space in relation to what is and what will be. The metonymized object.

Jury
Lebbeus Woods and Alberto Pérez-Gómez and others

Prize
The prize is the final stage of the study: Actualizing it. The winner(s) will be flown to Calgary to participate in a 'LIVE' architectural workshop manifesting their metonymized object (or derivitave of) onto the site at a human scale. They will work together with a special guest and volunteers to create a 'LIVE' architectural object for the duration of ArtCity's festival which occurs in the second week of September 2007. The winning entry will receive a trip to Calgary (airfare, hotel) and $1500 CDN. Local winner(s) will recieve $3000 CDN. The winning submission and 'LIVE' architectural workshop will be published.