The objective of this competition is to select the appropriate master plan proposal for National Museum Complex(NMC) to realize cultural base that is the spatial core of the Administrative City. 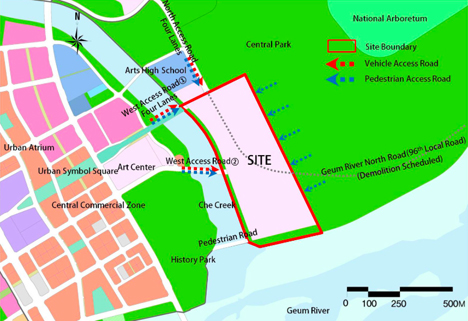 Description
Since 2007 the Administrative City has been constructing to lead balanced national development and to establish a model of sustainable city. There are 130,000 inhabitants in the Administrative City and will be about 500,000 inhabitants until 2030. The Administrative City has two ring structure road systems to arrange six different functional bases, locating the Central Park and Lake Park in it. Realizing the vision of plan, the Administrative City is a pro-environmental city reconciling inhabitants with nature so to be a future-oriented and sustainable city.
International Competition for National Museum Complex Master Plan Consists of two stages for the entire site plan and integrative plan of museum facilities. The stage one(1) of the competition is for the development plan of the entire project site(190,000m2) and the master plan of the 1st(first) phase project site(75,000m2). Five(5) design works will be selected in the stage one(1) and be eligible to enter the stage two(2) of the competition. In the stage two(2), adjudication will be on more developed master plan and the architectural design on facilities in the 1st(first) step of Construction (i.e., National Children Museum, Central Storehouse, and Central Operation Center). The winner of the stage two(2) will be granted the right of design contract with promoter and the coordinating role of the NMC master plan.

Prize
Winners in the stage 1 (5): 50 million KRW will be offered to each entry as expense cover.
Honorable mentions (6): 5 million KRW each