The purpose of the Open call, entitled “SECOND NATURE”, is the search of 7 original implementable design proposals that highlight and represent, as well as characterise the goals and the theme that have been decided. 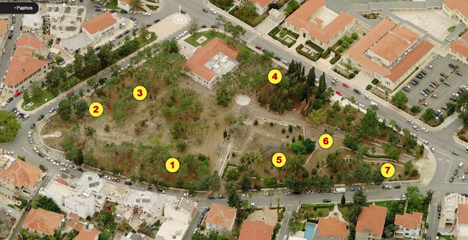 Description
The purpose of the Open call, entitled “SECOND NATURE”, is the search of 7 original implementable design proposals that highlight and represent, as well as characterise the goals and the theme that have been decided. The chosen proposals will be constructed at the site of the Municipal Garden, in the centre of Pafos.
This Open call focuses on the key issues of today’s modern towns, which contribute to the degradation of the quality of life of the citizens. Issues that lead to disdain and abandonment of public spaces and the urban environment in general.
The goal of this Open call is to activate and to utilise the “dead” spots in the central core of the town of Pafos and to turn them into viable areas, living organisms, which will become part of the wider urban environment and will contribute in improving the quality of life of citizens.
An example of such an area is the Municipal Garden, situated in the heart of the town. This area constitutes the historical and traditional centre of Pafos (Ktima). One of the most remarkable urban planning formations, not only for the town of Pafos but for the whole of Cyprus, consisting of public and private buildings with neoclassical influences, built in the early and mid 20th century.
The sum of these buildings, around the Municipal Garden, constitute the most important public buildings of the town. Examples are: the Town Hall on the north side, situated in the Municipal Garden area, the public schools’ complex on the north east side, developed along the main road on Grivas Dhigenis Avenue, the Municipal Library on the north west side with the 28th of October Square, the Costis Palamas Square on the south east side, as well as the Solomos Square on the eastern entrance of the garden.

Prize
The seven (7) best proposals each: 2000 euro (1000 euro as compensation for the period of preparation of the works, as well as the amount of 1000 euro for the construction costs of their proposals in the Municipal Garden)

Timetable
Announcement of the results: 07 September 2016 on the official website of Pafos2017
Workshop (construction festival), a 10day workshop for the completion of the structures: November 2016
Official ceremony for the illumination of the structure: 28 January 2017

Organizer
The European Capital of Culture