Regeneration of Wellesley Road and Park Lane in Croydon

London Borough of Croydon invited to negotiation stage authors of:

The London Borough of Croydon invites designers to meet the challenge of transforming a one kilometre length of the main route that punctures the heart of Croydon from an urban motorway into an environmentally friendly destination in its own right. Practices operating in fields of urban design, landscape architecture, architecture, planning and transportation are especially welcome.

Description
This project will be an integral part of the Centre’s improved network of public spaces. Wellesley Road and Park Lane currently make up an urban motorway dominated by a 1960ʼs underpass and subways. It cuts the heart of the town in two forming a north-south physical barrier to easy movement. Whilst the scale of the buildings and the space between creates drama, pedestrians and public transport are pushed to the edges. The splitting of the town centre causes major problems in the way central Croydon functions, with poor connections between major rail and bus stations, retail areas, office and cultural facilities and the creation of a poor urban realm. Wellesley Road needs to realise the potential that this epically proportioned space offers to regenerate the public realm in central Croydon.

The project will transform the road into an exemplary urban space of the highest quality, turning this through route into an attractive, vibrant and people friendly space that is full of activity. This redesigned urban landscape will help to knit together parts of the town centre that are currently broken apart. The project requires a forward looking, world class design which will be a visible manifestation of London Borough of Croydon’s ambition to become London’s Third City. The project must be seen in the context of a London-wide programme of regeneration following precedents such as, Trafalgar Square, High Street 2012 and Exhibition Road. Design for London and the London Borough of Croydon have allocated funding towards the design costs for the Wellesley Road and Park Lane project. Further funding will need to be sought for the implementation of the scheme. 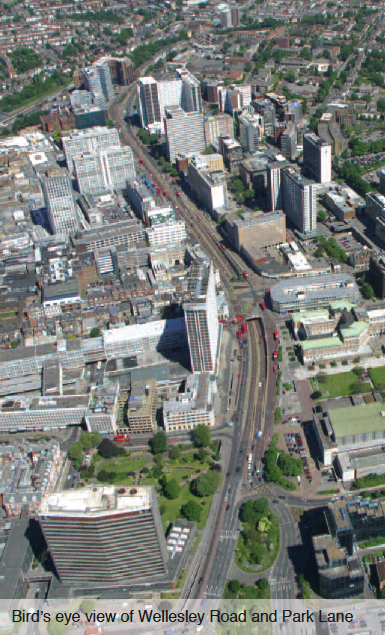 Prize
Winner: Design commission
Each of the design practices selected for Stage 2: £6,000

Entries
1. Up to 12 images on 35mm slides or jpeg format on CD.
2. 12 A3 sheets of images and text on previous work, built or unbuilt.
3. Based on practice’s experience provide a written statement of up to 1,000 words describing the priorities to be addressed in improving the Wellesley Road/Park Lane corridor and developing its use and role. The statement should also demonstrate the approach to working on a project of this scale and nature.
4. A practice profile of no more than four sides of A3.
5. A completed Pre Qualification Questionnaire.