Theme of the Prize for the first year: The PAV biosphere: Inner and outer osmotic boundaries. 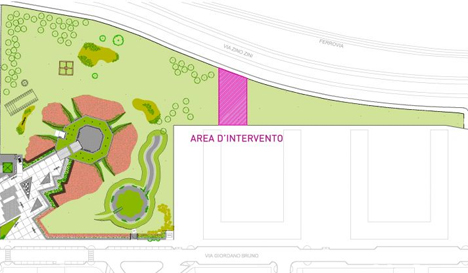 Description
“PAV - Parco Arte Vivente”, Turin’s Living Art Park and Experimental Contemporary Art Centre, is promoting the PAV PRIZE 2011, an international competition organised by Landscape Architect Gianluca Cosmacini, to create an environmental artwork in a portion of the territory of PAV.
Over the last decade, the relationship between individuals and the environment has extended – crossing the boundaries by osmosis between inside and outside - to include everyday working and social spaces. Urban space is experienced with a new collective awareness, not only as a container and frame for daily life, but also as an experiential part of our lives.
The rethinking of certain places implies a further reflection on living, that is experiencing the environment and nature in the city’s spaces scaled down to our own size. By reorganizing its tissues and cells into semantic and identity-related possibilities, PAV stands as the space for artistic, cultural and social production.
The “PAV” living art park is situated in Turin, in Via Giordano Bruno 31, an area where the factory of auto-parts manufacturer FRAMTEK stood until the 1970s.
The surface area of the park is approx. 24,000 sq. metres, of which 800 sq. m. are occupied by services, lecture rooms and teaching laboratories, as well as an exhibition area where the installation BIOMA stands.
The area is adjacent to the new headquarters of AMIAT (Turin’s Multi-utility Environmental Hygiene Service), a recently-built residential area and, in the direction of the railway line, with Via Zino Zini, the Olympic Street that joins the city centre with the ex-Olympic Village that was used for the 2006 Winter Olympics.
The PAV project was founded from a fusion among elements of architecture, art, ecology and biology, a key point also being the active participation of visitors in the artistic experiences organized in the park.