The concept of “ethos of the living” is meant as the relationship with the environment through the theme INTO THE HABITAT, a creative possibility where the connection between living beings and the park is established through the action of inhabiting. 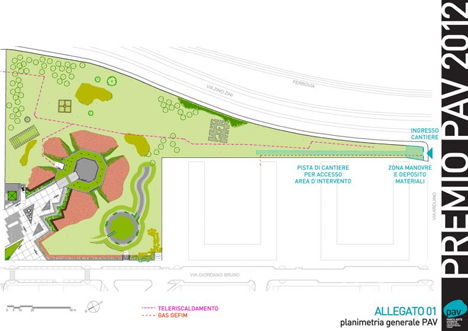 Description
PAV PRIZE 2012, curated by the landscape designer Gianluca Cosmacini, appeals individual artists or interdisciplinary groups to imagine inhabiting a new possible scenario, expression of a communal feeling of living together: a space intended for aggregation but over all for artistic, cultural and social production, where to experience a reflection upon the city’s open spaces and promote active citizenship as well as social cohesion, in order to develop a critical understanding of urban living.
The competition is subdivided into three phases: presentation of the projects and first selection of the ones most fitting to theme as only 5 (five) artists or groups will enter the second phase; a workshop to clarify in depth the Prize theme, after which the 5 (five) selected artists or groups will prepare the executive project; the final selection of the winning-project and the start of work on installation.
The winning-project will be realized during the first months of 2012 and on June 30 (Saturday) – day of the public opening day – the artwork will become part of the PAV permanent collection of art, just as, Corpo Vegetale by Felice Gualtieri, Armando Mangone and Maria Luisa Priori, winning-project of PAV PRIZE 2011.

Prize
The First Prize: 2,000 euro and the possibility to install the artwork for a maximum cost of 15,000 euro
The 2nd, 3rd, 4th and 5th prize: 1,000 euro each
Each of the five projects selected for Phase Two will receive a fixed lump sum of 500 euro as a contribution to travelling expenses sustained for participation in the workshop.
The project classified First will receive a fixed lump-sum refund of 2,500 euro as contribution to the expenses sustained during the period of realisation of the installation (direction of the work).
Realisation of the artwork will be financed to a maximum of 20,000 euro, including IVA (VAT = 20%), inclusive of all works and costs, with the exclusions indicated in the Technical Regulations.