We ask that submissions seriously consider the consequences of altering the current state of the 33 vacant acres of the Pruitt‐Igoe site, as well as the implications of removing the remaining buildings and infrastructure that have always been part of Pruitt‐Igoe’s historic cultural landscape. 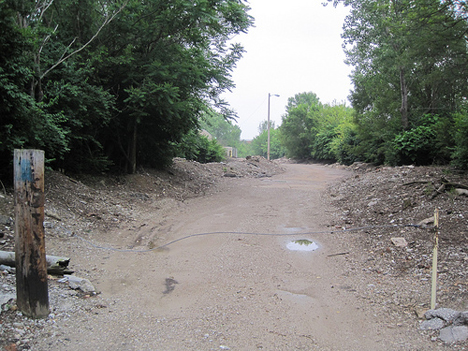 Description
Pruitt Igoe Now is looking for bold ideas. And, for ideas from sources as diverse in media and background as possible. For forty years, the interpreted memory of the Pruitt‐Igoe buildings has existed as a cautionary tale to architects, urbanists, and the public- and for just as long, these acres of land have been dormant, now largely overtaken with foliage. What is the future of the Pruitt‐Igoe site?
In crafting a proposal, the designer(s) should carefully choose and define the site for the proposal. We leave as an open inquiry what part of the Pruitt‐Igoe site or its surroundings requires intervention or contemplation through this competition. Of course, there is the historic boundary of the Pruitt‐Igoe project, bounded by Cass Avenue to the north, North 20th Street to the east, Carr Street to the south and North Jefferson to the west. The Site Description section includes information about what exists inside of and around that boundary. Yet around the boundary is a surrounding urban environment inclusive of several neighborhoods and containing some remaining built resources whose histories are intertwined with that of Pruitt‐Igoe. Both Jefferson and Cass Avenues are major thoroughfares, with Cass Avenue connecting west to merge into Dr. Martin Luther King Drive and Jefferson Avenue connecting south to downtown and to the former Mill Creek Valley, one of St. Louis’ historic African-American neighborhoods almost completely removed around the time that Pruitt‐Igoe opened. Additionally, Pruitt‐Igoe is near the site of the Gateway Arch, an iconic work of modernist design that serves as both the signifier of St. Louis and as the most recognized architectural work in the region.

Organizer
Michael R. Allen(the Director of the Preservation Research Office) and Nora Wendl(Assistant Professor of Design in the Department of Architecture at Portland State University)