Aim is to design a water landmark on the Adriatic coast: a space for public relations / a water- playground / a maritime square / a skatepark / temporary housing for tourists / whatever embodies the keywords landscape, interaction, dynamic space, fresh idea. 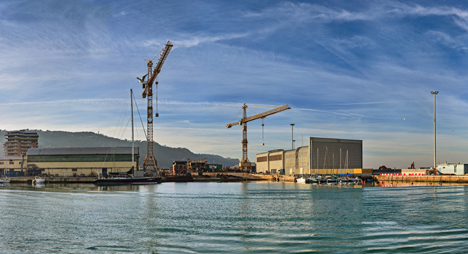 Description
Deep and controversial economical transformations have been hitting Europe. On one side they show a highly destructive potential; on the other side they are the key to undiscovered scenarios once unimaginable. Beneath the remains of ancient systems often lays the opportunity to write new cultures.
Shipbuilding industry has been hardly struck by crisis: while great arsenals are in distress, medium and small ones ceased to work time ago. Therefore plenty harbor areas are now in search of a new vocation since they have a strategic role for the urban, economic and landscape value of the city.
Which future to imagine for such areas? This is the challenge YAC proposes designers. YAC invites to redesign an old dismissed harbor area in a play-area that can take advantage of the particular situation between the sea and the city. The aim is to offer tourists and citizens a modern and appealing wellness and entertainment centre.
Whatever the meaning challengers will associate to a wellness / entertainment vocation (skatepark, movie theatre,...), YAC invites to work in a temporal and personal perspective.
YAC aims to promote a field of research focusing on such contemporary living axioms: in synthesis it shall be smart. Modern technologies can provide users quick information and discretional points of view like never before. In this sense Architecture must point the same direction by giving its users the the faculty to live space in changeable ways - depending on what they prefer.
Starting lines for reflections can be the themes of dynamic or modular spaces, as well as interactive park areas.