This competition creates a major challenge for future participants to develop architectural design proposals that will meet the highest quality public space standards and demands as well as maintain and respect the historical identity of the main street of Moscow. 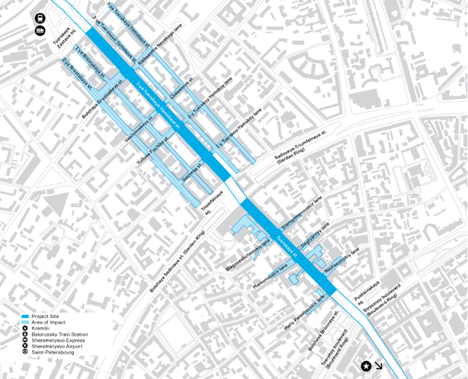 Description
Tverskaya is Moscow’s signature street. Broadened and virtually built anew in the 1930s-50s, it brings together the power of neo-classicist palazzos with Stalinist Empire style stores and restaurants and is a major thoroughfare of the city centre.
In the post-Soviet period the lure of the capital has attracted solid investment to Tverskaya and complemented its outlook with banks, luxury boutiques, new government and corporate offices, luxury cars and hotels. Today Tverskaya is a street of success, rushing cars, glamour, wealth and luxury.
Moscow is changing, however, and taking on a new dimension: it has caught onto the ideas of a city for pedestrians, street food festivals and lectures on boulevards. New, free and democratic public spaces are now in demand. The beginning of 1-ya Tverskaya-Yamskaya Street, which also is a part of the competition specifications, is marked by the recent transformation of Triumfalnaya Square as a good example of contemporary approach to creating comfortable spaces for get- togethers, cultural recreation and urban life. A bit earlier, in 2009, a new business quarter with pedestrian streets appeared on Belaya Square, that closes off 1-ya Tverskaya-Yamskaya. The Garden Ring, which intersects with Tverskaya, is also in for large-scale reconstruction. All this sets a new benchmark for the quality of urban environment, and the main street of the capital, one of its key tourist routes, cannot be left out of the contemporary context.
The Competition aims to convey these changes in the image of the capital. On the one hand, Muscovites take pride in Tverskaya, and there can be no drastic change in its appearance, while on the other, we need the image of a contemporary street in a friendly and open city. So, how do we get a friendly Tverskaya? This is what the competition is about.

Timetable
Selection of the winner: 7 July 2016