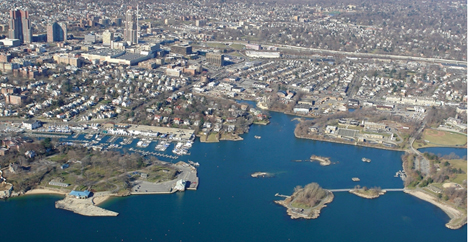 Description
This competition seeks architectural design ideas and a workable development program for a historic military armory, its 2.92 acre site and potentially three adjacent land parcels in the City of New Rochelle, New York on Long Island Sound's Echo Bay. It is structured as a three-part design competition with the initial phase an 'open' one for architects, designers, developers, urban planners, students and community members from around the world who are encouraged to apply and submit their designs for the site. This first phase seeks visionary proposals and innovative development solutions for the downtown site that links the commercial and residential core of New Rochelle to the waterfront of the Long Island Sound. North of the armory site (in red site 2) sits a large parcel of land marked (in yellow / Site #1) that will become the home to a large development of high-density residences, commercial storefronts and a small park facing the water. Adjacent to the armory site (in purple site #3 and in green site #2) are two waterfront parcels of land that may be assembled for development as part of a unified design plan. They are currently vacant properties but as part of a design proposal can be bundled together to create a single design plan. In addition a fifth site (in orange site #5) is also vacant and could be purchased by a potential developer. Design submissions should consider the significant position of the site as the only downtown parcel of land with a connection to Long Island Sound, its physical and cultural context, opportunities it creates for public waterfront access and possible commercial or nonprofit funding opportunities. Finally, the phase one jury is looking for a proposal that understands the pivotal nature of the site and its potential to lead to a rejuvenation of New Rochelle's downtown and Echo Bay waterfront.

Prize
Finalists: $5,000 each, the opportunity to tour the site with a New Rochelle official on October 10