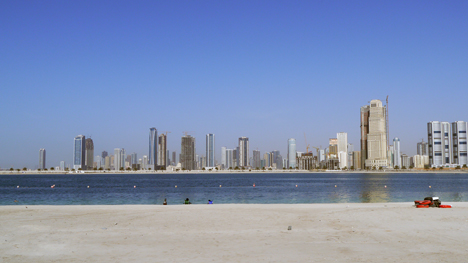 Description
Sharjah’s lagoons are the most prominent man-made landscape feature of the city. With the objective of increasing the waterfront area, the project aims to bring “water to the desert”. This is a clear attempt to repeat the success of other projects, such as the marina or festival city in Dubai, where waterside promenades have become the catalysts for public activities, increasing the value of neighboring properties. Unlike Dubai, where private developers were quick to see the potential of these prime locations, the more government-based attitude of the Sharjah real estate market is working to carefully plan the urban areas around the lakes and waterfront. Paradoxically, one of the most sought after locations for residential and commercial developments in the city remains almost completely undeveloped, awaiting future public intervention. At the time of writing, a general master plan for the area has been approved and in coming years development is expected to continue apace.