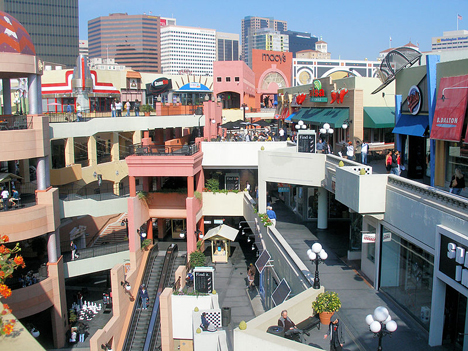 Description
Horton Plaza is one landmark that is not short on history. Dating back to c.1870, the plaza has been home to diverse and changing landscapes including today’s heavily developed urban environment. The plaza has undergone design after design after design; even landscape architect Lawrence Halprin tried to lend his creative hand in designing the plaza for the City of San Diego. But alas, the plaza today seems to be little more than another typical block that pedestrians have to cross to get to their destination. The plaza is now being occupied by a vacant building, vagrants, and a fenced off fountain, while its historic landmarks are all but forgotten. This terminal condition of the plaza will not last much longer. Horton Plaza is currently undergoing a major re-design effort by the City of San Diego. This change will be no small task. Horton Plaza will expand to more than double its current size with the demolition of the nearby Robinsons-May building. This re-design has the chance to change the historic plaza forever. Within the context of this urban environment Horton Plaza has the possibility to become home to some of San Diego’s greatest urban spaces. This open ideas design competition gives designers the freedom to create pedestrian and market spaces, re-envisioned water features, planting designs, special events staging grounds or anything that their creativity can envision. Ultimately, the goal of this competition is to encourage critical design approaches and public debate around a vitally important urban space in the heart of Downtown San Diego during a pivotal time in its history.