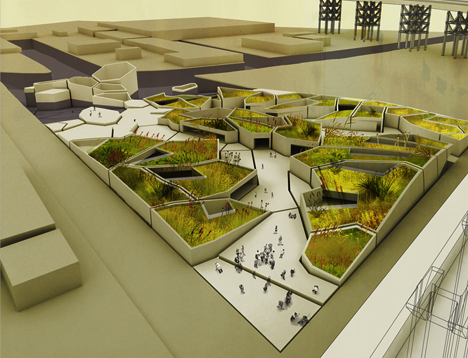 Description
Perfectly situated but notoriously maligned, the gowanus canal borders the vibrant brooklyn neighborhoods of red hook, park slope, and carroll gardens. as a result of heavy industrial pollution, the canal took on an iridescent purple sheen gaining it the nickname "lavender lake."
This currently vacant site is comprised of 230,000sf on the corners of smith and fifth streets in brooklyn. The site is bordered by the gowanus canal to the east, a privately owned building to the south, smith street to the west, and 5th street to the north. in 1975 the site was taken over by the city and deemed a "public place” site. The idea was for it to be used as a public recreation site, but it has been sitting behind locked gates ever since.
As the epa and new york city wrestle over whether or not gowanus will be designated as a superfund site, this competition proposes a new artists factory for the "public place" site. The proposal will be designed to both foster creative production and attract visitors to the factory and neighborhood. the factory will contain private/shared art studios, a storefront gallery/bar, analog/digital shops, and live/work spaces for rotating artists in residence. Both the interior and exterior realizations of the project should rethink the white boxes of modern art work and display spaces and conceive of a sequence of spaces that address the diversity of contemporary art and design at multiple scales. Open spaces and natural light are key components of all programmatic areas.

Jury
The editors of suckerPUNCH

Prize
US $2000 total
Winning entries will be published on suckerPUNCH.

Timetable
Winners will be posted on suckerPUNCH: 12 October 2009