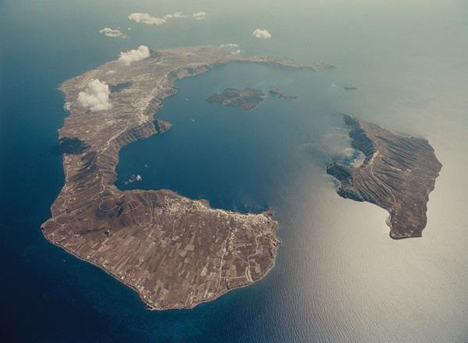 Description
Santorini is a small circular archipielago, formed by volcanic islands, located in south Aegean sea, about 200 Km to the south-east of the Greece’s mainland. It is also known as Thira (Θήρα in greek), forming the southernmost member of the Cyclades group of islands, with an approximate area of 73 Km² and a census population of 13.402.
Santorini is essentially what remains of an enormous volcanic explosion, destroying the earliest settlements on what was formerly a single island, and leading to the creation of the current geological caldera. Santorini has become one of Europe’s leadig touristic destinations because of its spectacular natural beauty. Santorini has a singular architecture of white and blue houses as you can find in Morocco’s or Tunisia’s coast. On the other hand, it has been criticized for its disorganized and excessive recent urban development.
Nea Kameni is a small uninhabited Greek island of volcanic origin of 3,4 Km² located in front of Santorini’s shore line. Along with it’s nearby island Palea Kameni, it becomes a touristic attraction for boats and cruise ships during the summer season.
The objective of the current contest is to contribute with new ideas for a Tourist Accommodation Prototype (TAP), taking as example of its location the singular setting of the Santorini’s coast line and the Nea Kameni and Palea Kameni islands.
A new model for tourist accommodation in which it resolves the problems within its location, in accordance to contemporary bioclimatic criteria and sustainability able to be adapted to other contexts with similar landscapes around the world.

Timetable
Publication of the Results of the Jury on the web Virtual Exhibition: July 31st, 2011