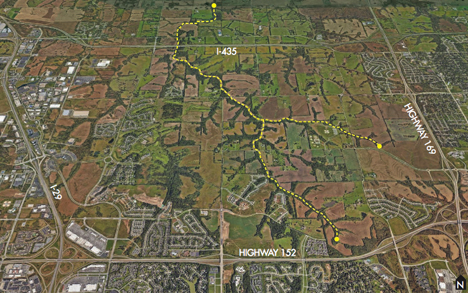 Description
The City of Kansas City is sponsoring a design competition to bring in new ideas, energy, and visions to the development of Twin Creeks, a 15,000 acre predominantly rural area in the Northland of Kansas City that is projected to house up to 75,000 people over the next 20+ years.
The focus of this competition is developing an inspiring vision for a potential new linear park that could stretch over 7 miles and up to 1,000 acres and serve as a backbone of the area. Individuals and multi-disciplinary design teams from across the United States and beyond with expertise in architecture, landscape architecture, urban planning, engineering, economic analysis, transportation, sustainability, community development, and public art, amongst other fields are invited to submit design proposals for the competition.
Entries must include an overall linear park conceptual design and illustrations of the four different design scenario conditions, as described within the competition briefing book. Up to three teams will be selected as winning teams and will present their proposals at a public event in Kansas City with the City, stakeholders and general public. The City will offer $24,000 in total prize awards, to be distributed evenly between the selected winning teams. One student submission will also be selected for Honorary Mention. Design proposals will be used to shape and inspire a new linear park and development in Twin Creeks.

Prize
$24,000 in total prize awards, to be evenly distributed between the selected winning teams at the end of September 2016 after completion of the public event
One student submission for honorable mention (no cash prize)

Organizer
The City of Kansas City